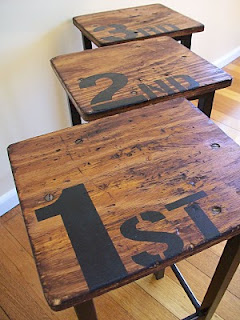 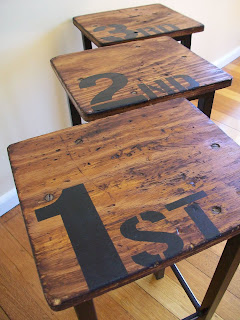 Not sure about you, though typographics always seem to catch my eye.

These stools were originally salvaged from an old secondary college where I assume they were used in woodwork class as most of them have what look like saw cuts, nail holes and chisel marks, not to mention the obligatory “Mark waz ere” and “Sharon luvs Paul’ graffitied on their undersides.

Here they are before: 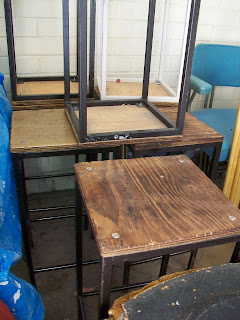 When I first brought six of these stools home everyone thought I was crazy – myself included to be honest. I loved the pared back industrial feel of them though they were a little too raw for me. I wanted to freshen them up (a bit) and add something eye-catching. I wasn’t quite sure what, however, so the stools sat in the garage for a while until I finally had a brain wave which told me to make three stencils from old x-ray slides (see, there is some use in those seemingly defunct internal photo sheets) and use them to paint some funky looking numbers on the seats! 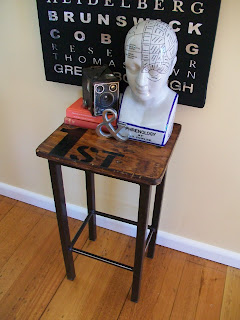 Before I added the numbers, I lightly sanded each seat before wiping on a diluted walnut stain to add some extra depth and richness. Once dry, I stencilled on the numbers with standard acrylic craft paint. To finish I applied two coats of my beloved danish oil.

I decided to leave the naturally distressed metal legs in original condition. I adore the extra character the old screws provide too. 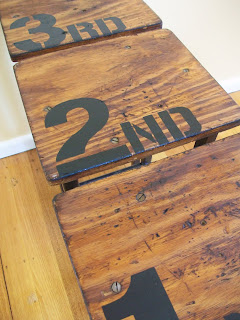 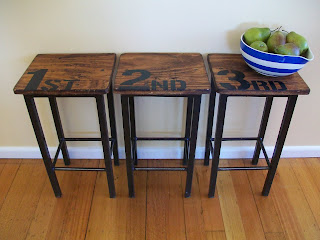 I recently sold two sets of these stools to a client who has three children and wanted to use three at her breakfast bar and one in each of their bedrooms as little side tables – how cute.