How to Make Hat & Sock Seats (AKA Paint Dipped Chairs) 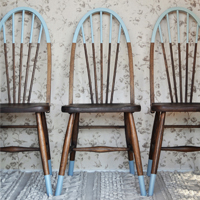 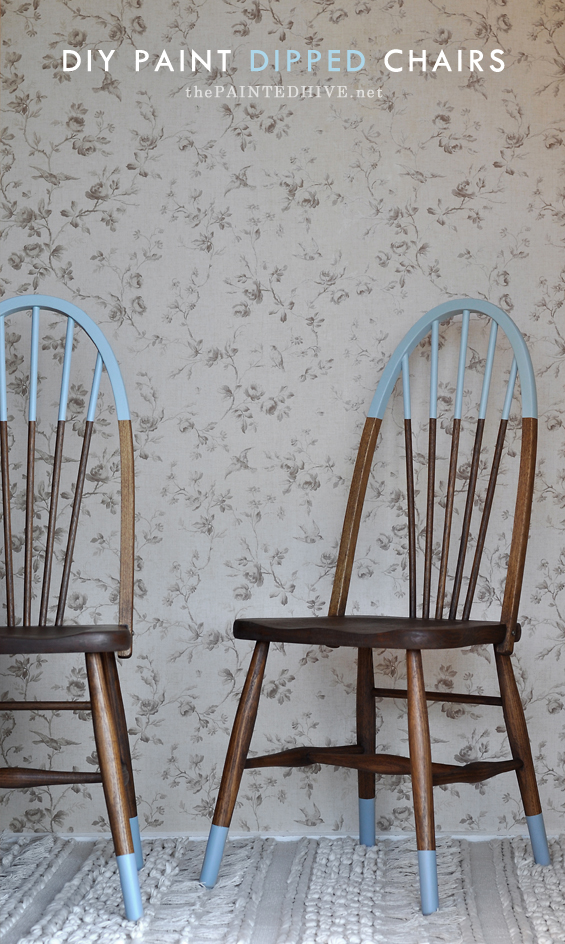 When I mentioned to my son that I was planning on painting just the tops and bases of these chairs, I described it to him as giving them all hats and socks. I thought that was kind of cute until he went on to add that “the hats will eat the socks and then the chairs will poo them out.” Five year olds are certainly hilarious.

Of course, these are the Windsor style chairs I picked up for my sister’s dining room. 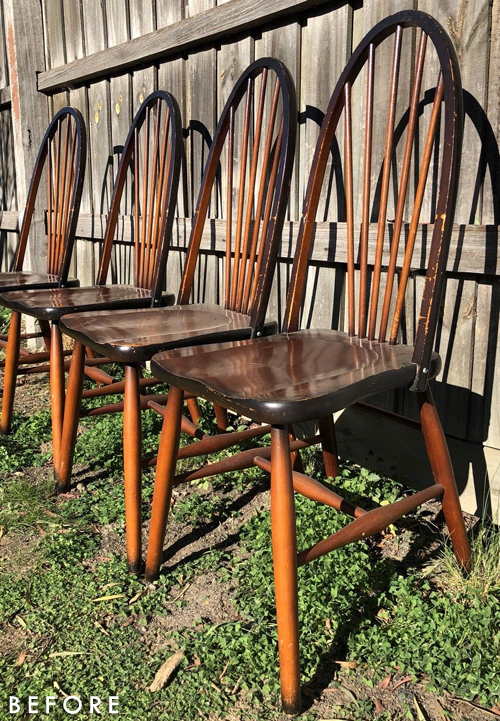 Photo from the Gumtree listing.

Originally, they had a worn and dated two-tone stain complete with plenty of chipped, shiny varnish. The finish was so opaque you couldn’t even see the lovely timber grain beneath.

I had visions of a much more natural and contemporary look, using a simple mid-brown stain with some soft blue-grey accents. 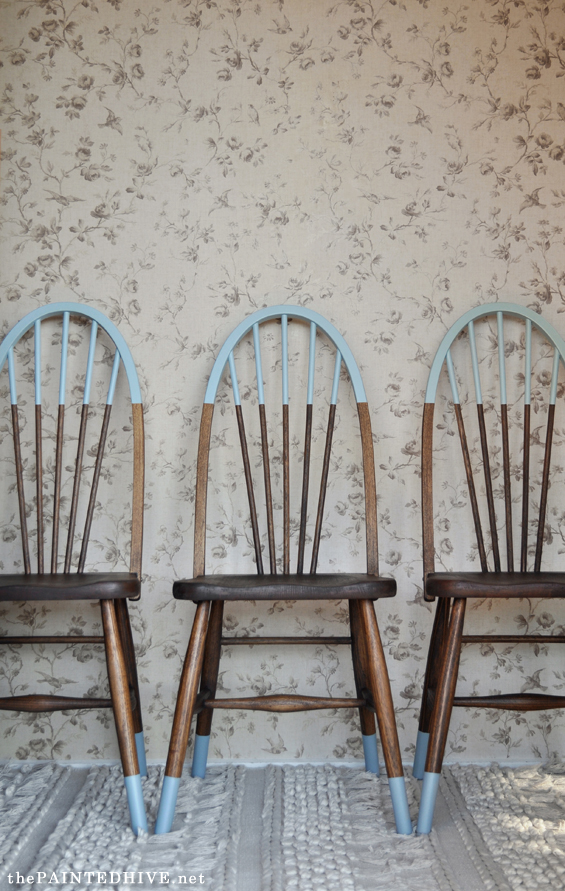 Getting to this point wasn’t exactly simple!

Sometimes old varnish flakes off really easily – and, of course, that’s exactly what I imagined this old varnish would do when I optimistically decided to buy these chairs. Though the existing finish was incredibly stubborn! Each chair took two coats of stripper followed by copious amounts of electric sanding (I used a palm sander with medium grit paper) followed by lots of fiddly hand sanding (again, I used medium grit paper then fine paper to finish). All up, it probably took around six or seven hours to take the entire set of chairs back to raw timber. 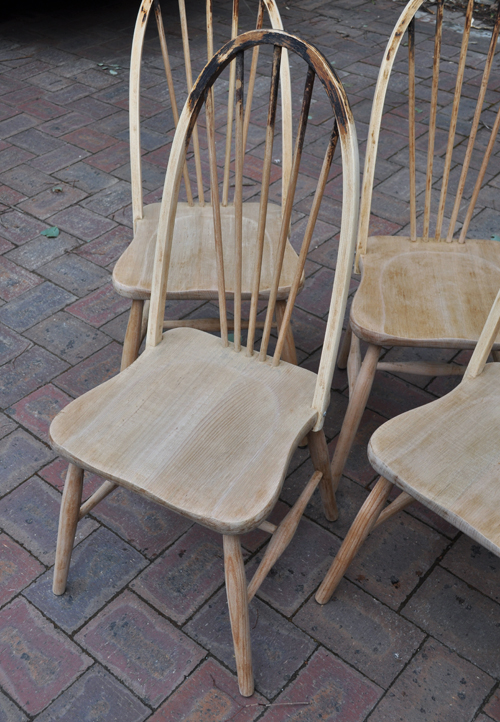 I left some of the more obstinate stain and varnish around the tops because I knew I was going to be painting over it.

I know it probably seems like there must be a better way, though short of using a professional dipping or blasting service, there’s really no other option. I was so desperate at one point I even went out and bought a soda blaster! Sadly, it was no match for the gummy varnish. In case you’re interested, I did try it on some other old furniture and it worked okay, though it’s certainly no magic bullet. I found it left the timber very rough, plus it’s slow going, messy and the soda is pretty pricey.

Anyhoo, with the chairs finally ready, I gave them each one coat of stain (Feast Watson Prooftint in Oak – which I had left-over from a previous project). I chose to stain them, rather than leave them natural, because I wanted a nice contrast between the timber and the paint. Plus, although it’s hard to tell from the above pic, the natural timber has quite a bit of orange in it which I didn’t want clashing with my sister’s honey-toned floors.

Once the stain was fully cured I added the “hats and socks”. 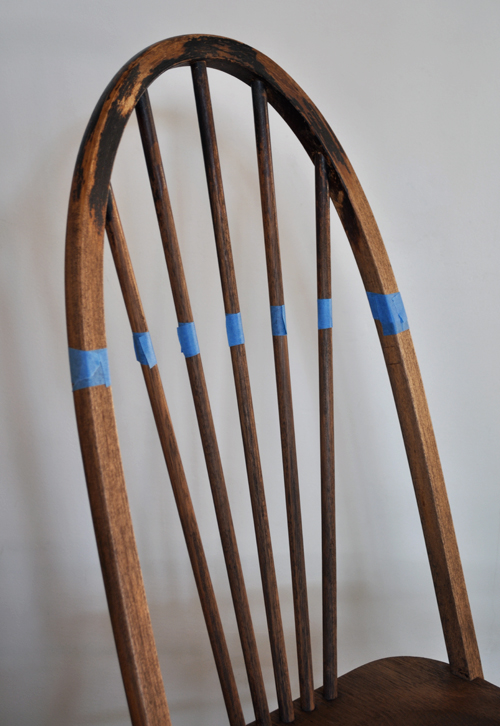 First I taped off the lines, ensuring the tape edges were smooth and well adhered. Getting the lines perfectly straight along the back rests was a little tricky due to the offset and angle of the spindles which creates a bit of a visual illusion. 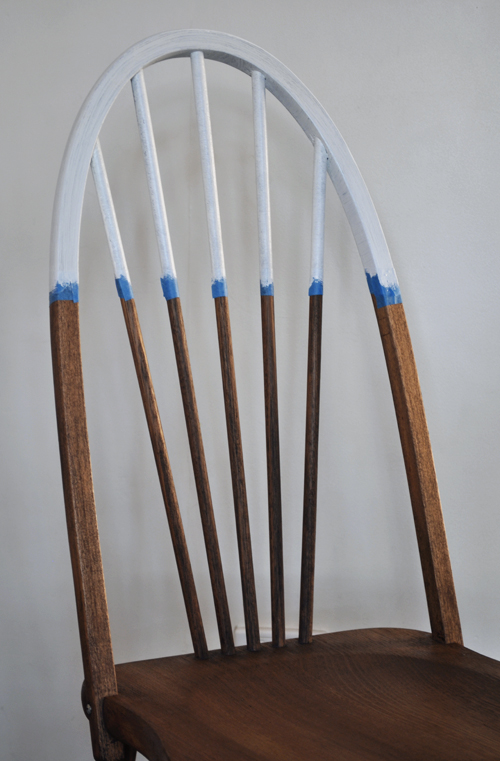 Next, just to be safe, I used a stain blocking primer. I probably wouldn’t have bothered if I didn’t already have some in the shed.

Note: I’m sure most of you have heard about the “perfect line” trick which suggests using the base paint colour first to seal the tape and conceal any bleed. Of course, my base was stain, not paint, so I decided to experiment by using a similar toned brown craft paint. I actually found that it made no difference. My lines were all nice and crisp regardless, which I think can be attributed to the smoothness of the wood. I imagine on a more textured surface there would be more chance of bleed and this technique would be beneficial. 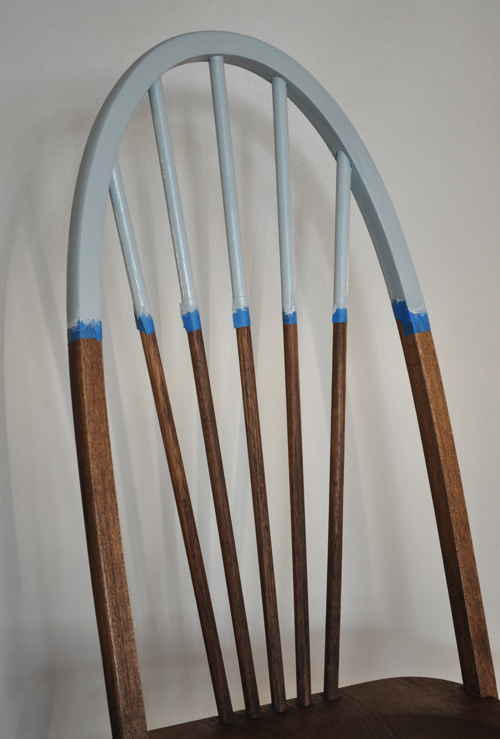 Once the primer was dry I applied two coats of paint. I created a custom colour using a variety of water-based paints I already had. The major component is Annie Sloan Chalk Paint in Duck Egg Blue. 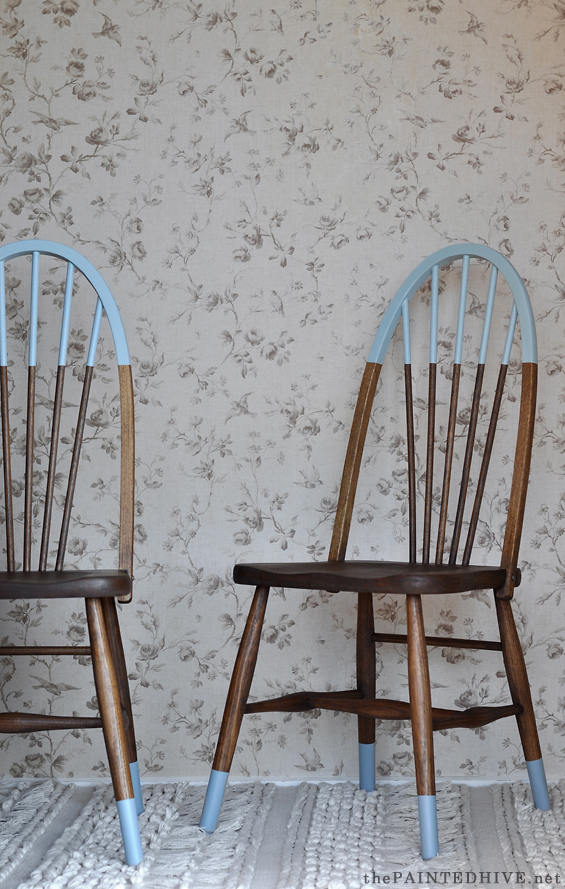 I went slightly deeper with the socks by adding a dash of charcoal to the paint. The difference is only subtle though creates a bit of interest. 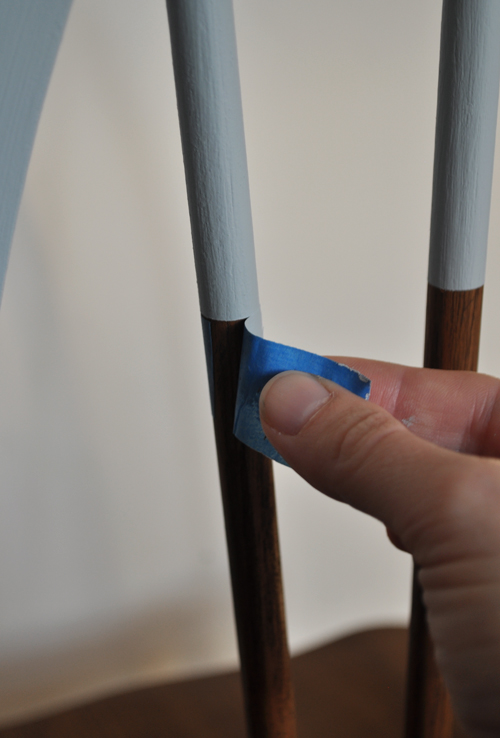 With the paint still wet from the second coat I carefully peeled the tape away. It’s important not to let it dry as once it ‘bridges’ over the tape there is a high chance it will chip as the tape is removed. 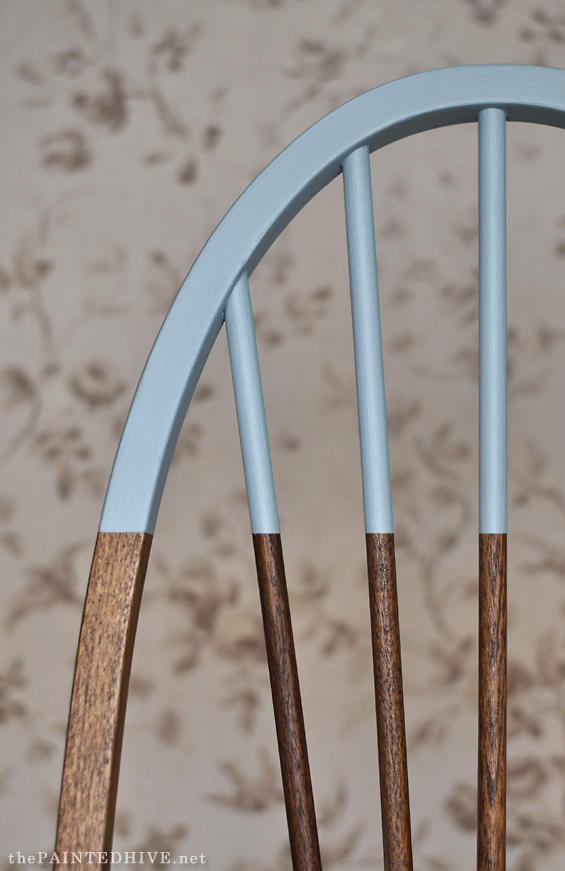 To finish the chairs, I sealed them with a few light coats of clear spray poly.

Am loving the way they turned out! Here’s hoping they work in my sister’s dining space.

And speaking of my sister’s dining space, I now have everything needed! Will try to pull the room together and hopefully share next week.

PS I haven’t forgotten about the table base tutorial. Stay tuned for that too! 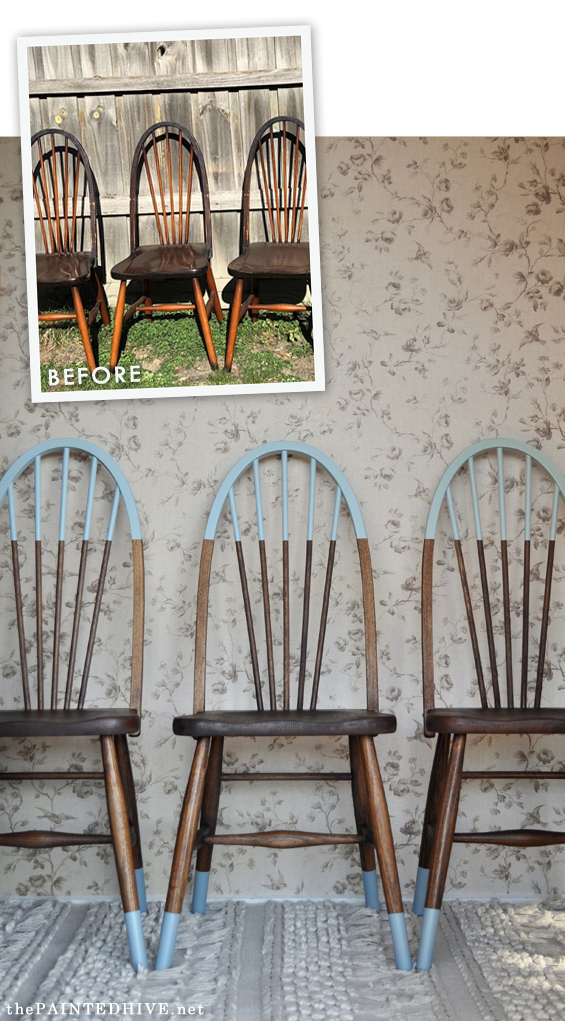 UPDATE
You can now find the completed dining room HERE.